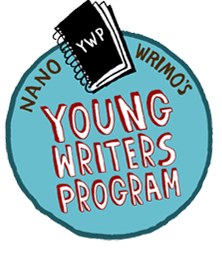 NaNoWriMo in the Classroom

As the days tick down toward November, National Novel Writing Month (NaNoWriMo) will soon be upon us.  Some of you may have participated in this literary marathon in the past; some of you may have even participated with your students!  NaNoWriMo challenges entrants to write–to completion!–a novel in the month of November.  You can track your progress toward your 50,000 word goal online, communicate with other participants, share your writing, and get pep talks and support from other writers at NaNoWriMo.org.  One of NaNoWriMo’s recent  participants was author Erin Morgenstern, whose NaNoWriMo manuscript went on to become The Night Circus, which was published in 2011 by Vintage Anchor and became a #1 National Bestseller.  Another NaNoWriMo success story was Sarah Gruen’s Water for Elephants (Algonquin, 2006), which won a 2006 Quill Award and a 2007 Alex Award.  It also spent 12 weeks on the New York Times bestseller list and was adapted for film in 2011, featuring Robert Pattinson, Reese Witherspoon and Christoph Waltz in leading roles.

In 2005, NaNoWriMo started the Young Writers Program (YWP), primarily aimed at classrooms of kindergarten through 12th-grade students. It is also used by homeschoolers. The difference from the regular program and the YWP was that kids could choose how many words to try to write. The standard wordcount goal for a young writer is 30,000. In its inaugural year, the program was used in 150 classrooms and involved 4000 students. Teachers register their classroom for participation and are sent a starter kit of materials to use in the class which includes reward items like stickers and pencils. Lesson plans and writing ideas are also offered as resources to teachers, while students can communicate through the program’s forums.

NYCWP teachers recently participated in a Teachers Teaching Teachers (TTT) Webcast to share their experiences with the competition.

Watch the webinar, then head over to the NYCWP Forum to discuss your plans for NaNoWriMo.