The day before seven people come for Rosh Hashanah dinner, I am treading time and twirling a wooden spoon. My husband is cleaning the house, which he does so well, and I am flirting with disaster. Or am I?

Eighteen hours before everyone is seated, I Google “Upper West Side butchers” and find a store called Schatzie’s. It sounds authentic—connected to the German and Austrian stock in which my genes have simmered for generations; and more immediately validating, it boasts local, organic products.

Rosh Hashanah is the celebration of the Jewish New Year, a time for reflection, reckoning, and renewal. It challenges observers to consider the questions, Am I being my best self? Considerate? Humble? If the answer to any of those questions is no, the edicts are not punishing; they are confrontational and cajoling. You can do better. You know you can. And you can be nicer to yourself while you’re at it.

My impulse is to have a Rosh Hashanah barbeque, the way we did when my dad was alive. My father Phil—a scientist and forever a boy from Brooklyn—was as devoted to Nathan’s hot dogs and Coney Island chop suey sandwiches as a Sufi is to the dervish. In his late years, when the proteins in his brain tripped him in and out of untraced orbits, a BBQ seemed like a beautiful way to spend some time together.

Otherwise, in my family, my mother had always made a killer Rosh Hashanah dinner: gefilte fish, chicken soup with matzo balls, brisket or turkey, noodle pudding, plum cake. Single into my mid-40s, I, for the most part, ceded the responsibility and power of homemaking to her and others.

My idea for a 2016 High Holiday BBQ was shot down by the mater familias. I cancelled out my wish to build a team to stir up familiar smells: Hebrew National, pungent sauerkraut, and beer evaporating from a bottle in the sun. My stepson, whom I adore because he is driven to create a family happier and healthier than the one in which he grew up, is a star on the culinary team, especially the grill event. Despite lobbying for more traditions in which he could root his growing family, he and his wife will be out of town on the holiday—and before and after.

And so, a little anxious but longing to express my take on tradition, I resorted to playing with more elaborate menus. I was concocting a salve to apply to the sore place in my heart in the chamber where family gathers—that which is existing, loved and lost, and imagined based on my desires

So, I pulled up from its roots an idea to build a meal in tribute to the people of Syria. Syria is in the news and each report is terrifying. Aleppo, one of the country’s most ancient and cosmopolitan cities, renowned among cooks worldwide for its red pepper spice, is bombed out. Hospitals and doctors, let alone markets, are getting pulverized. People hang on to hope for themselves, their families, and their children or they’ve been so traumatized, they’ve let go of hope.

I want to acknowledge how grateful I am for the blessings of my life. By cooking, I want to blend faith and chemistry and titrate spirituality. I will not use a recipe; I almost never do.

I could find my way to the Upper West Side, from the Bronx, practically with my eyes closed. I go. A sign outside Schatzie’s reads Popovers Are Back, as if there was a season for them.

“I am,” I answer with just a wisp of breath supporting my words.

In the back of my mind I see lamb, green beans, tomatoes, and pomegranate molasses. Onions, probably, but no carrots and no mushrooms. I want to wander from familiar flourishes.

Schatzie pulls out a packaged cut of meat with a label that reads Product of USA. Already I’m tearing his offering into little pieces for not being more local.

“How many people?” he asks.

There will be nine, but I don’t want him to push too much on me. I’ve already spent close to a $100 on quince jam, grape leaves, sugar dumpling squash, pumpkin, kohlrabi, chicken, spices, a challah, dessert, dried fruit, a 16th-century-inspired lemon zest bread and a bottle of fancy schmancy gin.

Other customers walk in—men who fill up the space where I had wanted to double park a dozen tentative ideas. They just pull in, with the confidence of those not used to, or wanting to, wait.   I put my foot against a white-tiled column and lean back. “I don’t know what I want,” I declare.

Yeah, for honesty and for confusion. Laugh at yourself! I take a minute to look around. A few families with small children enjoy sandwiches at square tables. The waitresses seem to know them. Shelves are lined with containers of gefilte fish, cranberry sauce, and potato salad that other customers are loading onto their orders.

I step forward to the counter. “I want to make a stew,” I say. Schatzie finishes wrapping a $58 brisket for a guy in an orange sweater.

“No!” he replies. I am so grateful he is telling me what to do.  I listen, eager as if he’s fortune telling that I will meet a tall, dark, handsome man. “You just put them in the pot with all your vegetables and that’s it. Don’t cook it too long. A couple of hours.”

“Right, Armando?” Schatzie asks as he turns towards one of his butchers. “How long do you cook your stew? Two hours? Three?” Yes, Armando nods. Three.

It is a gift, to be served by Schatzie. It gives me time to focus on present action. He took the chops and wrapped them in white waxed paper. “You can cook them just like this he says,” having changed his mind about cutting them for me.

The chops come to $31 dollars.

“You see,” he says, “with the other cut you would’ve needed two pieces. It would have been a fortune. And this will fall off the bone.”

Looking at Schatzie, big and beefy himself, in a white butcher’s jacket smeared with blood, I want to keep talking to him.

“My grandfather was a butcher, “ I say. I didn’t know him—he died when my mother was 16—but I can well recall the taste of the sirloin and the sweetness of the fried onions that my grandmother would make on Friday nights when my parents, sister, brother, and sometimes my aunt and uncle and cousins would fit around her table. I knew my grandfather’s store was on the East Side and served a fairly well-off clientele. A worn butcher block, to me, has always been as beautiful as marble.

“It was on the East Side,” I say, but Schatzie is already making my change.

I would have hung out longer if I could have thought of a reason. I felt like I was out on a limb, getting ready to create. But fear and judgment are at the ready to conspire with gravity and upset my footing and my joy. My impulse, in these situations, is to stop moving anyway. It’s easier to attach to a Schatzie and soak in atmosphere than it is to move forward and put myself on the line. The sad fact is that I’ve cut my creative output. But I’ve got a deadline.

I took the bag of lamb chops and slowly turned to go out across Broadway. I know my feet crossed the threshold and the traffic noise came up. When I get to the car, I get an anxious itch. Why didn’t he cut the chops? Why did I agree to let him give them to me just as they were? Can I bring them to another butcher to have them cut? Is he trying to pull a fast one?

The next morning, I put everything in the pot: lamb, beans, tomatoes, pomegranate concentrate, a little sugar, salt, pepper, onion. I cook it for way more than three hours; it is on a low simmer for about seven. Boiling breaks the chemistry of contentment, so I watch the flame. I barely leave the kitchen at all. 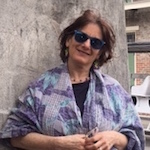 NAOMI PERSON has enjoyed writing stories since her 3rd grade account of the night Cinderella had a date with Paul McCartney. She has told stories ever since in a variety of media: theater, books, magazines, film, and public radio–where she happily spent a chunk of her career as a producer for NPR’s “Fresh Air with Terry Gross.”  Naomi is the author of Sow What?, a book for Girl Scouts about developing leadership skills and creating more sustainable food systems. She wrote about the relationship between subway musicians and their audiences, as part of the National Arts Journalism Program fellowship; and has written and produced a variety of radio specials and a short film on subjects ranging from Walt Whitman to Hurricane Katrina to artists with special needs. She currently works in a Pre-K classroom in the Bronx, where the stories of 4-year-olds surprise her every single day. She was one of the NYCWP’s fall Writers in Residence.